WHO, UNFPA Use Coronavirus Pandemic to Promote Abortion 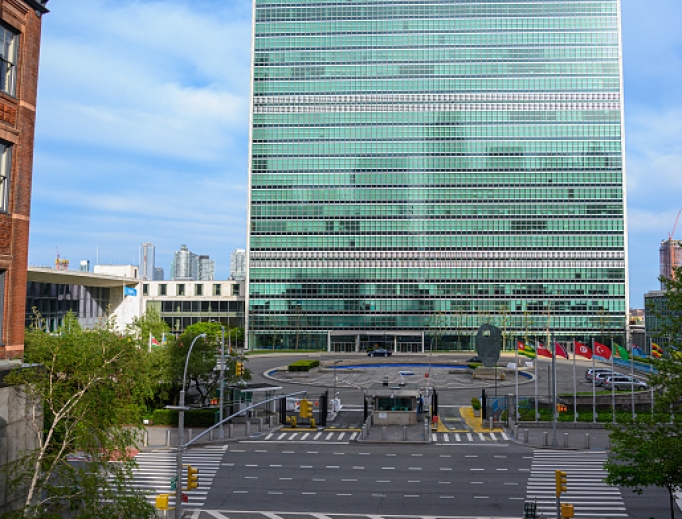 WHO, UNFPA Use Coronavirus Pandemic to Promote Abortion

Critics say the U.N. agencies are using this medical and humanitarian crisis as a pretext for pushing the abortion lobby’s international agendas.

As the Trump administration has moved to defund the World Health Organization over accusations that it mishandled the response to the coronavirus pandemic, both the WHO and the United Nations Population Fund (UNFPA) have continued to demonstrate their allegiance to the abortion lobby.

The U.N. agencies have issued COVID-19 guidance emphasizing the importance of abortion access and have even offered guidance on how to circumvent abortion restrictions.

The WHO recently posted a “Q&A: Self-care interventions for sexual and reproductive health and rights (SRHR) and COVID-19,” which refers to a 2019 guideline on “sexual and reproductive health self-care interventions,” including abortion. That guideline says that the use of medical abortion pills in the first trimester “without direct supervision of a health-care provider is recommended in specific circumstances,” which flies in the face of U.S. Food and Drug Administration safety guidelines and the laws of many countries.

While the WHO is advising at-home medication abortions without medical supervision as a “self-care intervention” in a global pandemic, the UNFPA recently stated that “pregnant and recently pregnant women who have recovered from COVID-19 should be enabled and encouraged to access routine antenatal, delivery, safe abortion and postpartum, or post-abortion care to the full extent of the law.”

Alongside the WHO’s promotion of abortion, the U.N.’s $2.01-billion Global Humanitarian Response plan to the pandemic provides UNFPA with $120 million in funding and designates part of its response as ensuring “the continuity of national and local health system capacity to provide access to integrated quality sexual and reproductive health.”

On May 18, John Barsa, the acting administrator of the U.S. Agency for International Development, sent a letter to U.N. Secretary-General António Guterres formally objecting to the inclusion of abortion in the U.N.’s pandemic response plan.

“The U.N.’s Global Humanitarian Response Plan (Global HRP), and its $6.71-billion coordinated appeal, must remain focused on addressing the most urgent, concrete needs that are arising out of the pandemic,” Barsa stated, noting that the U.S is the world’s largest donor to global health and humanitarian assistance. “Therefore, the U.N. should not use this crisis as an opportunity to advance access to abortion as an ‘essential service.’ Unfortunately, the Global HRP does just this, by cynically placing the provision of ‘sexual and reproductive health services’ on the same level of importance as food insecurity, essential health care, malnutrition, shelter and sanitation. Most egregious is that the Global HRP calls for the widespread distribution of abortion-inducing drugs and abortion supplies, and for the promotion of abortion in local country settings.”

Speaking on behalf of the U.S. government, Barsa wrote, “To achieve global unity toward this goal, it is essential that the U.N.’s response to the pandemic avoid creating controversy. Therefore, I ask that you remove references to ‘sexual and reproductive health,’ and its derivatives, from the Global HRP, and drop the provision of abortion as an essential component of the U.N.’s priorities to respond to the COVID-19 pandemic.”

Rebecca Oas, the associate director of Research for the Center for Family and Human Rights (C-Fam), recently wrote a paper, “The World Health Organization’s Abortion Overreach,” and told the Register how the WHO and other U.N. agencies have used the coronavirus pandemic to advocate for expanded abortion access.

“There is no international human right to abortion; that has never been agreed to by the member states,” Oas noted. “With regard to the WHO, it has no mandate to promote abortion as a legal matter, certainly. The consensus from the International Conference on Population and Development (ICPD) in 1994 was that the legality of abortion, and under what circumstances, is for nations to determine.”

Oas said that the WHO has published guidance on how to have an abortion “using methods that, frankly, are considered to be substandard.” She cited 2012 WHO guidance on “safe abortion,” which recommended the use of the abortion drug misoprostol alone in addition to its typical use in conjunction with the abortion drug mifepristone. The guidance acknowledged that “the effectiveness of misoprostol alone is lower, the time to complete abortion is prolonged, and the abortion process is more painful and associated with higher rates of gastrointestinal side effects than when misoprostol is combined with mifepristone.” The recommendation was due to “misoprostol’s wide availability and low cost.”

Oas also cited a recent WHO guidance that said “self-care for SRHR [sexual and reproductive health and rights] has perhaps the greatest potential to address unmet needs or demands in marginalized populations or in contexts of limited access to health care, including, for instance, self-managed medical abortion in countries where abortion is illegal or restricted.”

“When they’re not pressuring countries to change their laws, they’re facilitating going around those laws,” she said. “If you can give guidance on how to make lower-tier medical providers or even women themselves do it, essentially you can create a ubiquitous availability even if you can’t make it legal.”

Abortion activist websites like Women on the Web that sell abortion pills to people in places where it’s illegal are able to cite the WHO, as the group does here. “The WHO in this way is giving cover to people who are selling black-market abortion pills,” Oas said, creating “problems from a legal and a health perspective.”

During this pandemic, the United Kingdom and France have relaxed their restrictions on abortion pills, Oas noted, adding that “abortion groups have been campaigning for that to be the case well before the pandemic, and it will remain to be seen whether they go back to more strict controls afterward.”

“Even in countries where abortion is widely legal, we’re seeing this push to decriminalize and de-medicalize and un-regulate abortion,” she emphasized. This increases the risk of complications and of abusive parents or partners buying these pills. She pointed out that cases of this have been prosecuted in the United States.

Oas pointed out that the UNFPA has “previous ties to China, supporting the formation of its one-child policy,” and “made the Chinese officials who put that in place the recipients of their first-annual population award.”

Since 2017, the U.S. government has withheld funding from UNFPA. “The United States, when it defunded UNFPA, cited both its cooperation with the Chinese government and their promotion of abortion,” she noted.

And in March 2019, Secretary of State Mike Pompeo withheld a portion of the U.S. funding of the Organization of American States citing the Siljander Amendment, which prohibits the use of U.S. foreign-aid funds in lobbying for or against abortion.

“Given that several entities of the U.N. have been pressuring countries to change their laws on abortion,” Oas said, “it would be only consistent to apply the Siljander Amendment to those agencies, as well.” Such U.N. offices, she added, “would include such things as the World Health Organization, especially the HRP, the reproductive health unit within it; also U.N. Women and UNFPA,” and “the Office of the High Commissioner of Human Rights, where all these treaty bodies sit, because they’ve been the most aggressive, in terms of lobbying countries to change their laws.”

Elyssa Koren, the director of U.N. advocacy at Alliance Defending Freedom International, told the Register that while the U.N. likes to use euphemistic language for abortion, there are certain instances where U.N. agencies are quite clear. As an example, she cited the UNFPA-sponsored “Minimum Initial Service Package,” or MISP, that is marketed by the U.N. agency as an instrument “to respond to reproductive health needs at the onset of every humanitarian crisis.”

Koren described the MISP as “a box kit that UNFPA designed as a package to be sent to countries whenever they’re having a humanitarian crisis,” containing “everything from vacuum extractors to abortifacient medications to cranial clasps, which are devices to crush the skull of the fetus. These boxes go hand in hand with a manual, the instructions on how to use these tools for abortions; and, in addition, the MISP comes with abortion-trained specialists.”

A U.N. document describing the MISP kits noted that they contain “Vacuum Extraction for Delivery (manual) kit” and “Management of Complications of Abortion Kit.”

“It’s very clear that buried in these WHO action plans for these countries is going to come very targeted abortion promotion, whether it be like these kits or some other way,” Koren said.

UNFPA has frequently partnered with the International Planned Parenthood Federation (IPPF) and Marie Stopes International, as Koren outlined in a paper on UNFPA’s ties to abortion. She cited a 2002 keynote address where a UNFPA official praised IPPF as “a true pioneer in our field” and “rightly known for its brave and angry spirit and going boldly where governments have feared to go.”

Regarding the WHO’s funding ties, C-Fam’s Oas commented, “The U.S. can put in a policy like the Mexico City Policy and block funding to IPPF (International Planned Parenthood Federation) or Marie Stopes International, the other big abortion giant, but if they’re all too willing to fund multilaterals that partner with them anyway, it kind of defeats the purpose.”

Grace Melton, the Heritage Foundation’s associate for social issues at the United Nations in New York, told the Register that the COVID-19 pandemic has brought to light the larger trend that “several entities within the United Nations have been promoting abortion.”

While Melton praised the work of the Trump administration in expanding the Mexico City Policy, she echoed Oas’ point that “it hasn’t been applied to all the money that the U.S. gives to the U.N.; and then the U.N. gives to all of these other places, so when the World Health Organization is partnering for all of these efforts, including COVID-19, with [the abortion group] Ipas and Marie Stopes and International Planned Parenthood, there’s no surprise there that abortion is a huge part of their agenda.”

Melton emphasized that, especially in this pandemic, “people look to the U.N. or to the World Health Organization for aid,” and “instead they’re complicit in furthering abortion or circumventing the laws where abortion is illegal. They really are a part of this effort to equate women’s rights with abortion, and I think that does such a disservice to women all around the world.”