Why Cardinal Pell Is Vindicated by Cardinal Becciu’s Firing 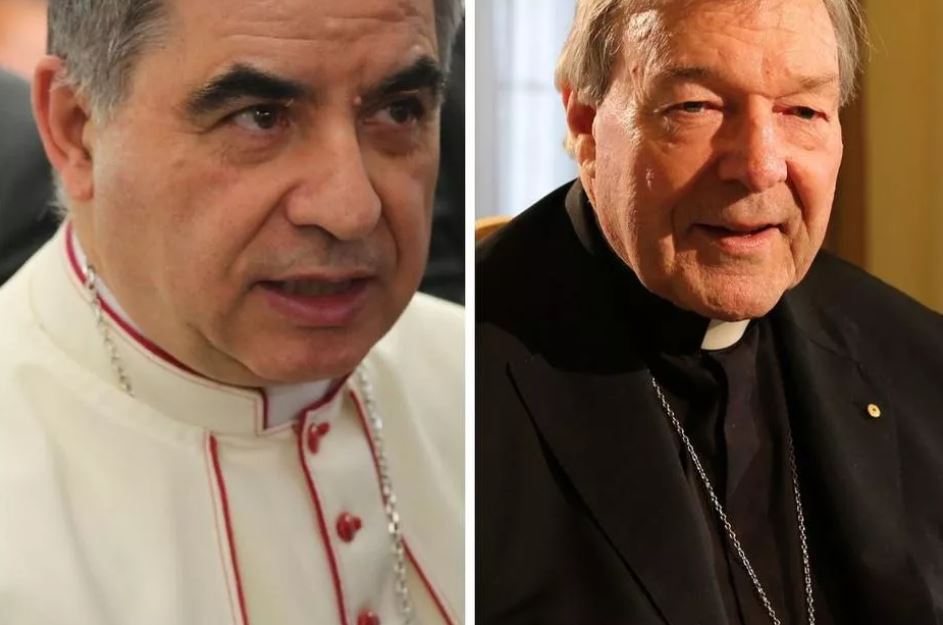 Why Cardinal Pell Is Vindicated by Cardinal Becciu’s Firing

As Cardinal Pell arrives in Rome this week after three years in Australia, a look at the counterpoint between the cardinal’s return and Cardinal Becciu’s fall.

An important, but not the primary, consequence of the stunning sacking of Cardinal Angelo Becciu is that it completes on the Vatican side what was accomplished by the Australian High Court in April, namely the complete vindication of Cardinal George Pell.

As Cardinal Pell arrives in Rome this week after three years in Australia, the counterpoint between the cardinal’s return and Cardinal Becciu’s fall is worthy of a novel.

“The Holy Father was elected to clean up Vatican finances … and is to be thanked and congratulated on recent developments,” Cardinal Pellstatedin reference to his brother cardinal’s dismissal. “I hope the cleaning of the stables continues in both the Vatican and Victoria [Australia].”

While the firing of a Curial cardinal itself is unprecedented, it may also be the first time another cardinal has congratulated the Holy Father on doing so. But it’s perhaps not surprising, as Cardinal Becciu himself acknowledged that Cardinal Pell viewed him as corrupt, despite his protestations otherwise.

No reason was officially given for the “resignation,” but Cardinal Becciu himselfconfirmed that he was asked to step down, while maintaining his innocence. Mostreporting on the dismissallinks it to Cardinal Becciu’s involvement in dubious property dealings when he was even more powerful than he recently was, serving assostituto(chief deputy) in the Secretariat of State from 2011 to 2108. In that capacity he was involved in a failed London property deal that has become an international cause celebre for Vatican financial mismanagement, and there are allegations that in other dealing he diverted papal charitable funds to investments controlled by his family members.

However, Cardinal Becciu claims that he was fired — rather summarily, in fact — by Pope Francis over another matter, a transfer of Vatican charitable funds (100,000 euros) to a Catholic charity run by his brother. Cardinal Becciu maintains that all was above board and welcomes the investigation.

But Cardinal Becciu was not only sacked from his Curial post. Pope Francis also relieved him of the “rights associated with the Cardinalate,” meaning that he will not vote in a future conclave and may indeed disappear from public ministry. That almost certainly means that a crime — canonical or civil or both — was committed, though neither the Vatican nor Cardinal Becciu have indicated as such. Nor has any charge been made.

The removal of his cardinalatial rights may relate to a future prosecution. A cardinal is entitled only to be judged by the pope alone. That’s why, for example, the Archdiocese of New York had to be specifically authorized by Pope Francis to investigate former cardinal Theodore McCarrick. Without his cardinalatial rights, Cardinal Becciu will be able to face any possible charges by Vatican magistrates in the normal fashion.

The congratulatory statement from Cardinal Pell — itself highly unusual — indicates the background to this dramatic development.

In 2014, Cardinal Pell was appointed prefect of the Secretariat for the Economy, a sort of finance minister and treasurer for the Holy See. He immediately began sweeping reforms aimed at transparency and accountability, proper financial controls and external audits. Then-Archbishop Becciu, who saw the Holy Father daily assostituto— the Pope’s chief of staff — and ran the daily affairs of the Secretariat of State, fought back fiercely.

A personal note: In April 2016, I was in Rome and dropped by the offices of Cardinal Pell for what had been scheduled to be a social call to a good friend. When I arrived, the cardinal and his staff were in a crisis meeting, having just received a letter from Archbishop Becciu canceling the external audit that was then underway, a centerpiece of Cardinal Pell’s reforms. The cardinal’s office had been entirely blindsided, but the prefect himself was serene. He knew of Archbishop Becciu’s opposition, but he was not overly worried, as the archbishop did not have the authority to cancel the audit. It was a clumsy attempt at obstructionism that would fail. Until it didn’t.

Faced with a choice between his financial reformer and the Vatican old guard, Pope Francis chose the latter. He backed his chief of staff on canceling the audit, delivering a near-fatal blow to the reformer’s claim to papal support. That public humiliation of the Secretariat for the Economy was compounded in July 2016, when the statutes authorizing its mandate were changed and some of its authority was taken away. Cardinal Pell was blindsided on that, as well, not being informed in advance. Archbishop Becciu had blocked Cardinal Pell, defeated the audit, stalled the reforms and diverted the Holy Father from his original reforming enthusiasm.

Time was running out for Cardinal Pell to regather his forces, as corruption of another kind was coming for him in Australia: The Victoria police’s “Get Pell” operation was building toward charges of sexual abuse. In June 2017, Cardinal Pell, the former archbishop of Melbourne and Sydney, took a leave of absence from the economy secretariat to answer the false charges back home. He would not return as prefect, as his term expired while he was unjustly incarcerated in Melbourne.

Yet while Cardinal Pell was in jail, his vindication began. In December 2019 a series of articles in theFinancial Timesreported on a very strange Vatican property deal in London, in which large sums of money had apparently been employed in an irregular fashion and improperly recorded in Rome. Archbishop Becciu was now a cardinal and out of the direct line of authority, but serious questions were being asked of his decisions in his previous role. There were arrests of other officials, and some lay staff were dismissed.

In April, the Australian High Court finally — and unanimously — affirmed what had been evident from the beginning, namely that Cardinal Pell was innocent of the charges. In eviscerating the logic of the lower courts, the High Court made it abundantly clear that something was seriously awry in Australian justice.

Upon regaining his freedom, Cardinal Pell gave interviews stressing that the journalistic revelations about the London deal confirmed that he and his team were on the right track.

With the pandemic shutting down much of the Holy Father’s regular activity, he evidently decided to use the time to return again to the financial-reform arena. Pope Francis made key appointments and revived what he had done in 2014 in favor of Cardinal Pell’s reforms, but reversed in 2016. The Pope reverted from the conversion that Cardinal Becciu had wrought upon him. The Pell-style financial reform was back in business.

And now Cardinal Becciu has fallen, and what a great fall it is. While he insists upon his innocence and asked the Holy Father for a chance to demonstrate it, Pope Francis has already rendered a judgment in his case.

A leave of absence could be a precautionary measure awaiting further investigation. A sacking, compounded by banishment from the exercise of the cardinalate, is a peremptory sentence.