Why Charles Dickens Cried When He Met St. Jeanne Jugan 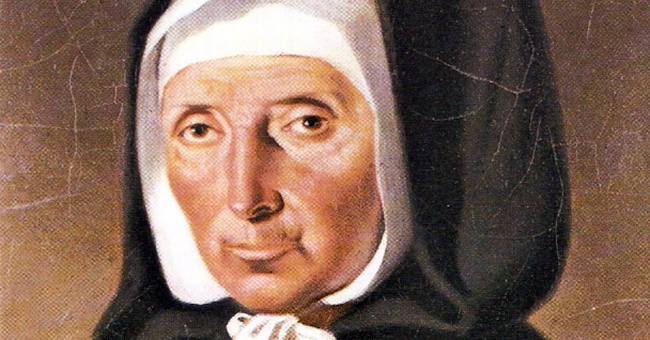 Why Charles Dickens Cried When He Met St. Jeanne Jugan

“Her words went straight to my heart, so that my eyes, I know not how, filled with tears.”

With the Little Sisters of the Poor the focus ofreligious freedomthreats recently, I was curious to know more about theorder.

St. Jeanne Jugan is the foundress of theLittle Sisters, who today quietly devote themselves to care of the elderly and alone in 31 countries.

Born in 1792 in Brittany, France, Jeanne grew upin tough times. The French Revolution meant begging was a way of life for many.Religious orders weresuppressed and those who openly practiced their faith were often imprisoned.Her father died at sea when she was just four, leaving her mother to raise eight children in a one-room cottage. Jeanne learned her faith secretly at home from her mother and a group of women who got together to pray. Barely learning to read and write, she was noted for her love of God. In her teenage yearsshe worked as a kitchen maid for a wealthy family wholived their faith by serving thepoor and elderly. Jeanne often went along to care for these people, and these experiences brought about a dedication to the elderly.

After declining a marriage proposal, Jeannetold her mother, “God wants me for himself.He is keeping me for a worknot yet founded.”Yet it was quite a few years before she discovered her vocation. She worked as a nurse at a hospital and continued caring for the old and alone. After a few years of hospital work, Jeanne and two other women rented a room in a cottage and devoted themselves to daily Mass and caring for people in need, especially the old and sick.

One cold winter night,Jeanne brought home ablind elderly widow, giving the woman her own bed.What seemed to be a random encounterturned out to bea foreshadowing of her life’s mission. Along with the two other women,she prayed, visited the poor, and taught catechism to children. Jeanne and herfriends started acongregation in Saint-Sevran andbegan ahome for the elderly. She wrote a simple set of rules for them. The three went out door-to-door asking for food,clothing, andmoney,Gradually they took in morepeople to care for, and more young women became members, dedicated to the dignity of the elderly poor.

Jeannechose the name Sister Mary of the Cross butwas commonlyknown as Mother Marie of the Cross.She would often say, “the poor are Our Lord.”Locals began to call herhumble sisters and their hospitality efforts, theLittle Sisters of the Poor.

In 1851 a small group of Little Sisters crossed the English Channel to establish the first home outside France, ina London suburb. Spain was next,followed byBelgium, Ireland, North Africa and North America. In just the last decade, new homes for the elderly have opened in India, Peru, and the Philippines.

Like the grain of what that falls to the earth and dies, Jeanne’s life hasproduced great fruit that continues today—but she was not always honored or appreciated during her life. One day a newpriest who was put in charge of the young congregation decided to replace Jeanne as superior and place herin retirement without any say in the decision. While others protested what was viewed as an injustice, Jeanne simply accepted itas the will of God, and went about begging for contributions to support the growing order. The priest was later removed by the Holy See in 1890. Jeanne told her sisters, “We are grafted into the cross and we must carry it joyfully unto death.”When she died 27 years later, few of the young Little Sisters even knew that she was the foundress.

Once aftermeeting Jeanne Jugan, Charles Dickens said, “there is in this woman something so calm, and so holy, that in seeing her I know myself to be in the presence of a superior being. Her words went straight to my heart, so that my eyes, I know not how, filled with tears.”

At her beatification Pope John Paul II said that “God could glorify no more humble a servant than she.”

Pope Benedict said that Saint Jeanne’s canonization would “show once again how living faith is prodigious in good works, and how sanctity is a healing balm for the wounds of humankind.”

Today, pilgrims can visit the house where Jeanne was born, the House of the Cross at Saint-Servan, and the motherhouse at La Tour Saint Joseph in Saint-Pern, where she lived her last 23 years and is buried. There are now 31 homes for the elderlyrun by the Little Sisters of the Poor in the U.S. alone. St. Jeanne Jugan’s life speaks to the sanctity of all human lifeand our obligation to them.

She was always joyful and even-tempered. She used to give us very good advice. She often spoke to us about the presence of God within us, in the tabernacle and in the poor. Her love for the poor was boundless, and she had given her whole life for them, right to the end.—Sr. Clementine Joseph

She once said to me, “I’m going to tell you three thoughts; if you make them part of your life, you will become a great saint: the just man lives by faith; charity covers a multitude of sins, and she who keeps guard over her tongue keeps guard over her soul.” I have very often thought over her wise advice.—Sr. Saint Albert

Iwas much edified by her deep humility and by her love for the poor. I have treasured my memory of her through all my life and have always considered her to be a saint. One would notice how happy she was when she had others around her to listen to her speak about the poor old folk: “My little ones,” she would say to us, “Never forget that the poor are Our Lord.”—Sr. Léontine de la Nativité

She lived in the presence of God and always spoke to us about him. On meeting us she would say, “Do your work for God alone.” One felt that she spoke from the abundance of her heart. She was always quite simple, always serene, and one felt the presence of God in her soul. She never spoke about herself, either for good or for ill.—Sr. Angélique de Ste. Marie