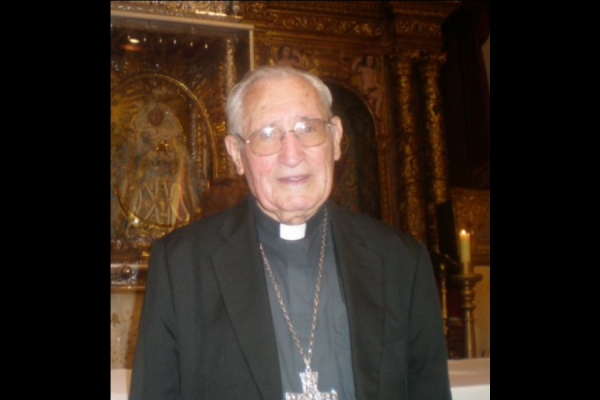 After the death in June of 104-year-old Chilean Bishop Bernardino Piñera from pneumonia due to COVID-19, Iguacén was the oldest living Catholic bishop in the world.

Iguacén’s last public appearance was in February for his 104th birthday. According to reports, his health had been in sharp decline since then.

The Diocese of Huesca said that his funeral would take place Nov. 26 in the Holy Cathedral of the Transfiguration of the Lord in the city of Huesca. Iguacén will then be buried in the cathedral’s Capilla del Pópulo.

An important figure in the Church in Aragon, Iguacén retired in 1991 after seven years as bishop of the Diocese of San Cristóbal de La Laguna o Tenerife in the Canary Islands. In his 22 years as a bishop, he also led the dioceses of Barbastro and Teruel.

Iguacén was born in the small town of Fuencalderas in Aragon on Feb. 12, 1916. He was ordained a priest for the Diocese of Huesca in 1941, at the age of 25. In addition to serving as a parish priest, he was also the vice chancellor of a seminary in San Lorenzo and was apostolic administrator of Huesca for a short time.

He held various positions within the executive committee of the Spanish bishops’ conference. He also wrote several books and articles, especially on the cultural heritage of the Church and Marian devotion.

At a Mass and celebration for his 100th birthday in 2016, Bishop José María Gil Tamayo, the then secretary general of the Spanish bishops’ conference, said that Iguacén was “an example of dedication to the Church. In him, over the years, remains that evangelical freshness of a shepherd, his delicacy, his affection, his closeness to the people, which in the background is the closeness to God that he has maintained.”

Pope Francis also sent a message for Iguacén’s 100th birthday, saying that he joined spiritually “in thanksgiving to God for the gifts received in his long life as a pastor and generous service to the Church,” assuring him “of a remembrance in his prayers so that the Lord may always accompany him in his goodness and grant him an abundance of peace and spiritual serenity.”

What connection does Moderna’s vac...