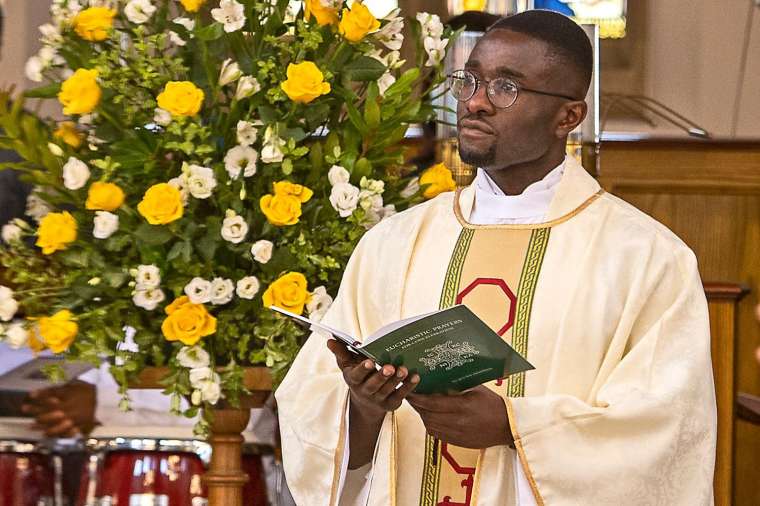 Paschal Uche woke up early on the morning of Sept. 18, 2010, a day that would change his life. He needed to set off in good time in order to pass through security at the event he was attending in central London.

The 21-year-old hopped on the Tube near his home in Stratford, East London, and headed towards Westminster. On the way there, he began to see more and more young people heading in the same direction: towards a meeting with Pope Benedict XVI after Mass at Westminster Cathedral.

“I remember being there in the Mass and being really wowed by the liturgy, and all that was happening,” Uchesaid in an interview for a forthcoming EWTN “Vaticano” program marking 10 years since the German pope’s electrifying visit to Britain.

“And as I was praying after Holy Communion, just taking in the wonder of being there that day, I got tapped on the shoulder and someone said: ‘It’s time now to come out and to welcome the Holy Father on behalf of the young people.’”

Uche, dressed in a sky blue sweatshirt with the name of his diocese on the back, was ushered into the brilliant sunshine on the cathedral steps. The pope stood a few feet away from him. In the piazza before him were2,500 young Catholics.

Addressing the pope on behalf of youngsters in England, Wales and Scotland, Uche said: “Pope John Paul II said that our faith is a noble and authentic adventure. And we really desire for other young people to experience this. It is our prayer that your visit inspires us to be saints, saints of the third millennium.”

The crowdexploded in cheers and applause. Benedict smiled. Uche seemed taken aback by the rapturousreaction.

“Holy Father, for many of us, before today you were a face on television or a picture in a church,” Uche said.

“But today we behold you face to face, and on behalf of the Catholic youth of this great nation I would like to express my profound and heartfelt gratitude for your visit. Thank you, and may God bless you.”

With that, Uche was led over to the pope, who patted him on the shoulder and thenclasped his hand as they exchanged a few private words.

Last month, almost 10 years on from that memorable day, Uche was ordained to the priesthood. It was the end of along journey for the young man who became, from that moment in 2010 onwards, a kind of figurehead for young Catholics inBritain.

At the end of the ordination ceremony, Williamsread a letter fromBenedict XVI. In it, the Pope Emeritus expressed his delight at the ordination and said that he would pray for Uche, commending him to Mary, the mother of Christ.

The Diocese of Brentwood’s website reported that afterwards Uche said: “I felt that the occasion was so much bigger than us –- it was about the Universal Church. The connection to the papal visit with the letter from Pope Benedict was a lovely thing to have happened. Those are the things you hold on to.”

“When I greeted him all those years ago, I told him in a private moment that I was thinking about priesthood, and he said he would pray for me. I wrote to him twice about the ordination and had no response. But when my mother wrote, a reply came. It was a bit like the miracle at Cana!”

In his interview with EWTN GB, Uche recalledthat he had felt a personal connection to Benedict XVI even before he began speaking.

“So I remember looking over at him and then looking to my script there, getting ready to read. And then as I glanced back to him, he was very focused on me. And it changed the whole dynamic, I think, of the talk, of the speech, because I felt I was really addressing him and he was really receiving that,” he said.

He notedthat when Benedict leaned in to greet him, they had brushed faces, giving Uche a sense of the pope’s “great gentleness” and grandfatherly spirit.

“He went on to ask me a bit about myself — and again that sense of him being interested in who I was. He didn’t know me from anywhere, but I really felt there was a warmth and a gentleness to his character,” he said.

In the following days, Uche was inundated with Facebook friend requests and messages from people saying how touched they were by the event.

He described it as “a moment of the Holy Spirit,” saying that he had been fortunate to be “the instrument” through which youngCatholics expressed their sense of connection to the pope.

“My friends and family were extremely proud. And even to this day, if you come into my house, there’s a picture of myself and the Holy Father as you go up the stairs,” he said.

In the wake of his ordination, Uche has been assigned to the parish of St. James the Less and St. Helen in Colchester, after spending the summer at Our Lady of Lourdes in Wanstead.

He told EWTN that to this day wherever he goes he is introduced as “the one who met the pope.”

“And while that’s a point of laughter,” he said,“it’s [also] a point of great joy, I think for myself and for us all, that the Holy Father came to us.”