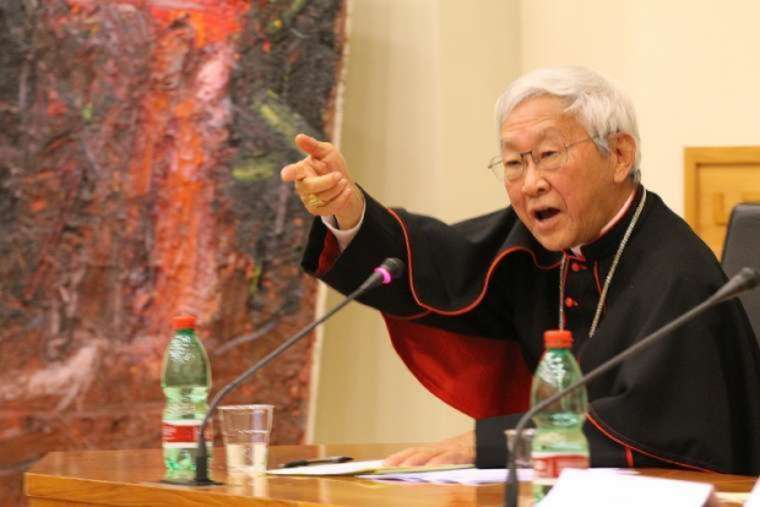 Cardinal Joseph Zen has rejected claims that the 2018 Vatican-China deal was approved in draft form by Pope Benedict XVI, and accused Vatican Secretary of State Cardinal Pietro Parolin of “manipulating” Pope Francis on the Church’s engagement with China.

In an essay published on his blog Oct. 7, Cardinal Zen, the emeritus Bishop of Hong Kong, offered an extended and personal critique of an Oct. 3 speech given by Parolin on the history and future of the Church’s missionary activity in China.

“I read the speech given by Cardinal Parolin,” Zen said. “It’s sickening!”

“As [Parolin] is not stupid and ignorant,” Zen said he was left to conclude that Parolin “told a series of lies with eyes open.”

“The most repugnant thing is the insult to the venerable Benedict XVI by saying that he approved at the time the agreement signed by the Holy See two years ago, knowing that our sweetest, most gentle Benedict certainly will not come out to deny it,” Zen said.

The Vatican-China agreement on the ordination of bishops, ratified in September 2018, is seen by the Vatican as an effort to help unify the underground Catholic Church in China–which has always remained in communion with Rome–with the state-sanctioned Chinese Patriotic Catholic Association. Following the agreement, seven illicitly ordained bishops of the CPCA were brought into full communion with Rome.

Cardinal Parolin said in his Oct. 3 speech that the pastoral goal of the agreement was to free up local churches to “dedicate themselves to the mission of proclaiming the Gospel.”

During his speech on Oct. 3 in Milan, Cardinal Parolin reiterated the Vatican’s commitment to a provisional renewal of the agreement, which expires on Oct. 22.

“For the dialogue to bear more consistent fruit it is necessary to continue it,” the Secretary of State said at an event marking the 150th anniversary of the presence of the Pontifical Institute for Foreign Missions (PIME) in China.

In his Oct. 3 speech on the subject, Parolin cited Pope Benedict XVI in his discussion of the Church’s missionary efforts in China. Pope Benedict, who had quoted his own predecessor, St. John Paul II said in 2007: “It is no mystery to anyone that the Holy See, in the name of the entire Catholic Church and – I believe – for the benefit of all humanity, he hopes to open a space for dialogue with the authorities of the People’s Republic of China, in which, once past misunderstandings have been overcome, we can work together for the good of the Chinese people and for peace in the world.”

Parolin also cited Cardinal Giovanni Battista Re, the dean of the College of Cardinals and former prefect of the Congregation for Bishops, who said in March according to Parolin that “Pope Benedict XVI [approved] the draft agreement on the appointment of bishops in China, which it was only possible to sign in 2018.”

Cardinal Zen disputed Re’s alleged remarks, calling it “very ridiculous and humiliating” for Re “to be ‘used’ once again to support the falsehoods of the Most Eminent Secretary.”

He accused Cardinal Parolin of “lying” about Pope Benedict’s approval of a draft agreement with China, and of manipulating Pope Francis on the agreement.

Christians in China have continued to be persecuted and harassed by authorities, Zen said, “despite the agreement.”

Yet, “it seems that in order to save the agreement, the Holy See is closing both eyes on all the injustices that the Communist Party inflicts on the Chinese people,” he said.

In his Oct. 3 speech, Parolin said he had seen signs that the agreement was helping unify underground Catholics with members of the CPCA, and would “definitely” help the Church avoid illicit consecrations of bishops in the future.

There have been “misunderstandings” over the agreement, he said, acknowledging that while there are still “many other problems” that Catholics in China face, they cannot all be addressed at once.

“[W]e know that the road to full normalization will still be a long one, as Benedict XVI predicted in 2007,” Parolin said.

However, Parolin emphasized that the agreement “concerns exclusively the appointment of bishops,” and the Vatican has noted that no further illicit consecrations have taken place since the deal was signed in 2018.

Zen dismissed that as a worthwhile achievement.

“All legitimate bishops, but in a Church that is objectively schismatic, is that good? Is it progress? Is this the beginning of what kind of journey?”

The Vatican-China agreement gave CCP officials a say in the ordination of bishops, but also allowed for the enforcement of “Sinicization” in Church matters, Zen said.

The policy of “sinicization”, announced by Chinese president Xi Jinping in 2015, aims to enforce Chinese and Communist identity on all religious practice in the country. It has included instructing churches to remove images of the Ten Commandments and replace them with sayings of Chairman Mao and Xi.

Parolin has previously said that “inculturation is an essential condition for a sound proclamation of the Gospel which, in order to bear fruit, requires, on the one hand, safeguarding its authentic purity and integrity and, on the other, presenting it according to the particular experience of each people and culture.”

“These two terms, ‘inculturation’ and ‘sinicization,’ refer to each other without confusion and without opposition,” Parolin said in 2019.

One Chinese bishop, Bishop John Fang Xingyao of Linyi in the province of Shandong, said in November of 2019 that “[l]ove for the homeland must be greater than the love for the Church and the law of the country is above canon law.”

“How can the Most Eminent say that all this has nothing to do with the agreement? Can life be cut into pieces?” Zen asked.

The cardinal also accused Cardinal Parolin of manipulating Pope Francis on the agreement.

“I will be asked: Do you say that Parolin manipulates the Holy Father? Yes, I don’t know why the Pope allows himself to be manipulated, but I have evidence to believe so and this makes it even less painful and repugnant to criticize the Holy See,” he said.

Cardinal Zen told CNA last month that the Church’s silence on the mass detention and abuses of the Uyghurs in Xinjiang, supposedly as a result of negotiations to renew the 2018 agreement, “will damage the work of evangelization” there in the future.

Pope Francis has remained silent on what some human rights groups have called “genocide” of Uyghurs in China’s northwest.

“The resounding silence will damage the work of evangelization,” Zen told CNA in an interview last month.

“Tomorrow when people will gather to plan the new China, the Catholic Church may not be welcome.”